The Convergence Revolution and the Future of Enterprise Commercial Space

Much is being said these days about the coming evolution of technology. This paper will provide an initial look ahead at how “soon to arrive” technology will impact the Enterprise Commercial workspace and serve as a foundation for a longer look at how the environment will change the way we approach where and more importantly, how we work.

Traditional brick and mortar facilities relied on static utility installations to support the “3 utilities”, namely HVAC, plumbing and electrical needs. Beyond that, technology needs for telephony and data as they emerged over time were addressed as an overlay to the building and when one aspect of technology was obsoleted or improved, it was done with little to no impact to the others. As time and technology moved forward, especially in the 1990’s and since then, they converged and voice and data platforms became interdependent on each other and grew far more efficient, requiring less space and power consumption while at the same time providing vastly improved performance. From an enterprise consideration, businesses have become far more dependent on technology for various means of support, both internally for administrative, financial and operating functions as well as externally supporting clients and to a large extent, the technology has become a part of the “product” that businesses are offering customers.

After the realization of the pandemic that is upon us, we are now confronted with the reality that the workplace has changed dramatically, and the old days are truly behind us now. “Work from home” concepts and strategies will now be considered a “must” in the IT planning and design discussions…

At this point in time, we have finally reached the era where technology has become the “4th Utility” and it is a vital component of successful operation in todays business climate. How Corporations are planning and deploying their “4th Utility” strategies now will have a major impaction on the cost, efficiency, and competitiveness of being in business in the near future.

The “4th Utility” hasn’t yet been given an officially recognized definition, but is universally considered to be comprised of a collaboratively environment that is servicing “connected users” consisting of a variety of both hardwired and untethered devices that provide streaming content, augmented and virtual reality and incredibly fast data delivery in a technology controlled shared workspace. In other words, “data everywhere for everyone”.

Before the arrival of COVID-19, we were already hearing buzzwords such as “5G” and “smart buildings, indicating that the changes were coming whether we liked it or not. After the realization of the pandemic that is upon us, we are now confronted with the reality that the workplace has changed dramatically, and the old days are truly behind us now. “Work from home” concepts and strategies will now be considered a “must” in the IT planning and design discussions and will cause the deployment of 4th utility in the workspace to gain significant speed for a number of reasons. First among the reasons is the flexibility and automation that these technologies bring will reduce the overall number of people required to service and support the buildings, as well as having a major impact on the expense of heating, lighting, securing and occupying it. The next reason is that by making more data available faster and including automation and cloud computing strategies into the IT support fabric, it will make the employees servicing customers from the corporate space more efficient, reduce the head count and ultimately reducing the overall amount of real estate space needed. Coupled with an effective work from home strategy that allows employees to access the network remotely, it gives the corporations the ability to dynamically scale the use of their real estate so that it can be used in the most effective ways possible.

But what are the actual building blocks of the “4th utility”? Please see the graphic below for a better visual:

As shown, it starts with a basic building services infrastructure, consisting of supporting traditional systems for HVAC, electrical, plumbing, fire alarm and other legacy systems. From there, it moves to the connectivity and communications layer, where things will quickly get much more interesting. Beyond your traditional LEC services delivery into your main telecommunications room to bring the outside connection to your cabled voice/data systems and the more recently added wireless networking on top of that, you are now also looking at adding in POE++ which adds the ability to support ever increasing amounts of electricity to network devices and others (more on that in a minute) and soon the IoT (“Internet of Things”) in which all manner of traditionally non-networked devices will be attached to a network. A common place example of IoT already found now are vending machines that report product inventory and revenue, temperature, and operating information to remote services through the network. Instead of having to dispatch a service technician to check on a machine or rely on employees to report troubles, the machine will advise the operator on a real time basis so that they can not only dispatch when there is an issue with the vending machine, it can also diagnostically report how the machine is operating so that before the machine malfunctions it can be repaired, often times saving in both repair cost and lost inventory. That is just one of many coming examples.

Another component of the communication layer is A/V and particularly video streaming. It is currently estimated that 82% of IP traffic will be video by 2022, with over 75% of the worldwide video traffic taking place over mobile devices (source: Cisco, VNI 2018; TIA Smart Buildings, 2019). That is not referring to people watching Netflix and Hulu, which they were already doing back in 2015 in huge numbers. The big increase in video consumption is in the corporate realm where connection with other employees and customers is increasingly being done in a collaborative manner over video conferencing and will only get more in-demand over time.

The topic of connectivity and communications is vast and easily the subject of many books and is well beyond a white paper providing an overview, so I will move on from there to the topic of building operating systems that control power, security and energy. The network fabric of the building is already expanding to not just communication for employees and occupants to use but to provide sensors that monitor when and where the employees are at so that companies only heat, cool and light occupied areas, which leads to significant utility bill reductions. Increasingly, building will also see much more reliance on networked capabilities using POE++ to support such things as low voltage LED lighting systems, security systems, workstation devices such as docking stations and video monitors, etc. POE ++ refers to” Power over Ethernet” and is an IEEE standard that most people are at least somewhat familiar with. It has undergone significant development in the last few years and is becoming a legitimate alternative to traditional high voltage electrical systems for many applications in the building and are far less expensive to both install and operate. They are also considerably more “green” and help corporations move towards “net zero” initiatives and use less energy resources, leading to again, less overall expense and in many cases, some unique tax advantages.

After the power and energy building block, the next levels are mostly concerned with using data for provide information and management of the building environment, creating the real basis of a “Smart Building”. Again, a picture is worth a thousand words: 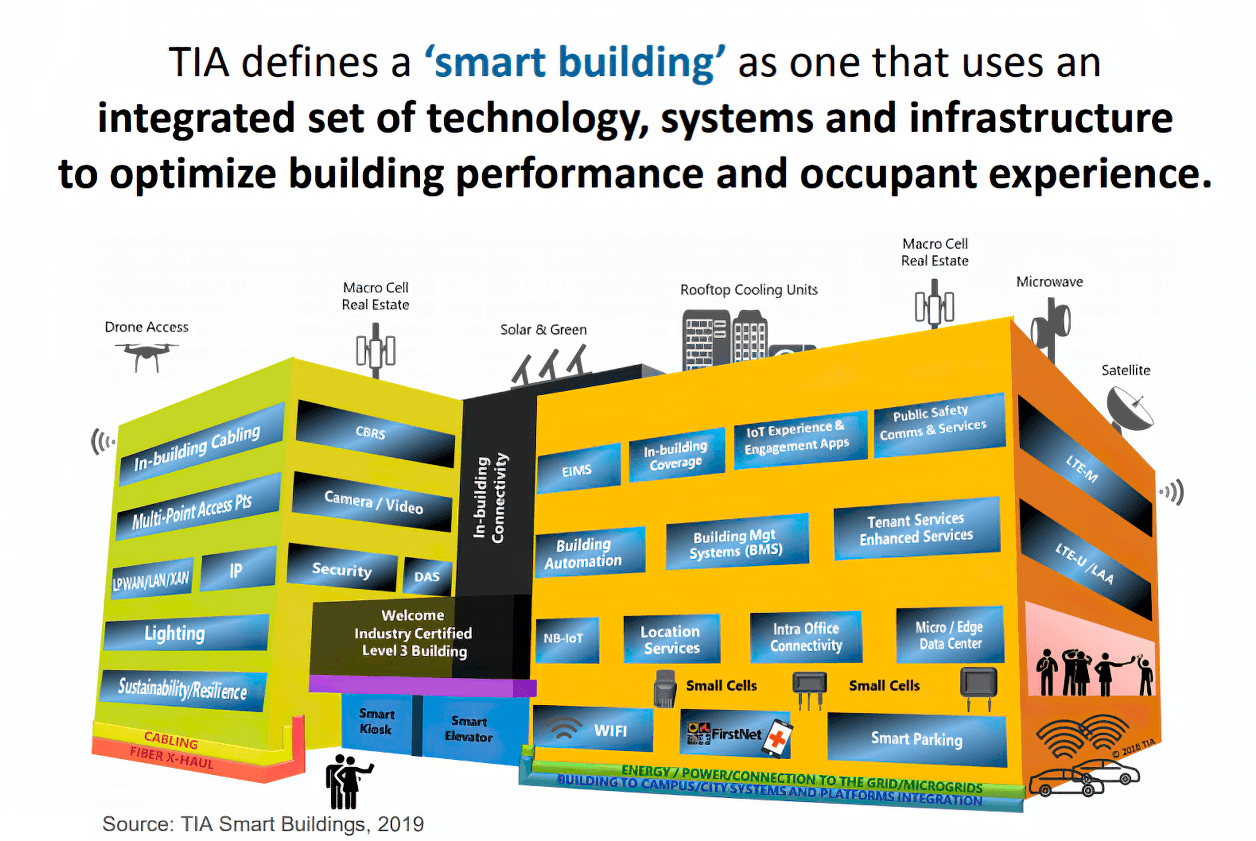 If you are thinking that is going to take a LOT of network traffic to support, you would be right. In fact, the amount of data needed to support the coming onslaught of technology will challenge the traditional methods of connectivity, which brings me to the last topic, wireless cellular 5G. Changes in technology and user needs have already grown to a global mobile population of 3.98 billion unique users with 80% of all mobile use taking place inside buildings. It is estimated that monthly mobile data usage with surge to 98.34 GB/SIM by 2025 (source: Verizon 2019). To support the ever-increasing demand, carriers are deploying 5G infrastructure now and we will start to see a wide spread migration to it from 4G LTE as soon as they can get it built up, with an estimated tipping point occurring sometime in the next three to four years. Once 5G is deployed, again, the landscape for buildings will be changing for several reasons. First, 5G has limitations in terms of both distance and building penetration. Therefore, it will require a huge number of cell antennas installed outside to support the carrier networks and then most buildings will migrate to private 5G LTE wireless systems inside their buildings to support users. Once those become widespread, there will again be a migration in how user technology is deployed and the cost to scale will once again decrease while performance and efficiency improve.

In conclusion, this is not meant to be a comprehensive road map but a look ahead for conversation as to how to plan future IT deployment strategy. The face of IT continues to change as technological and economic factors hasten a converged infrastructure. Services that were once beyond imagination are now vital as technology plays an ever-greater role in modern business operations. Welcome to the convergence revolution!

This site uses cookies to enhance your browsing. By continuing to browse the site, you are agreeing to our use of cookies. Learn more here.

We may request cookies to be set on your device. We use cookies to let us know when you visit our websites, how you interact with us, to enrich your user experience, and to customize your relationship with our website.

Click on the different category headings to find out more. You can also change some of your preferences. Note that blocking some types of cookies may impact your experience on our websites and the services we are able to offer.

These cookies are strictly necessary to provide you with services available through our website and to use some of its features.

Because these cookies are strictly necessary to deliver the website, refuseing them will have impact how our site functions. You always can block or delete cookies by changing your browser settings and force blocking all cookies on this website. But this will always prompt you to accept/refuse cookies when revisiting our site.

We fully respect if you want to refuse cookies but to avoid asking you again and again kindly allow us to store a cookie for that. You are free to opt out any time or opt in for other cookies to get a better experience. If you refuse cookies we will remove all set cookies in our domain.

We provide you with a list of stored cookies on your computer in our domain so you can check what we stored. Due to security reasons we are not able to show or modify cookies from other domains. You can check these in your browser security settings.

These cookies collect information that is used either in aggregate form to help us understand how our website is being used or how effective our marketing campaigns are, or to help us customize our website and application for you in order to enhance your experience.

If you do not want that we track your visit to our site you can disable tracking in your browser here:

We also use different external services like Google Webfonts, Google Maps, and external Video providers. Since these providers may collect personal data like your IP address we allow you to block them here. Please be aware that this might heavily reduce the functionality and appearance of our site. Changes will take effect once you reload the page.

The following cookies are also needed - You can choose if you want to allow them: